Thru the kindness of Mindy Perez-Rubio, President and CEO of REP, Sariaya Leanring Centre for Development (SLCD), Teatro Sariaya, was able to bring kids and adults to watch REP's production of "The Quest for Adarna" in Greenbelt 1 on Sat, 25 Jan 2020. All enjoyed the show very much. What a learning experience for them! 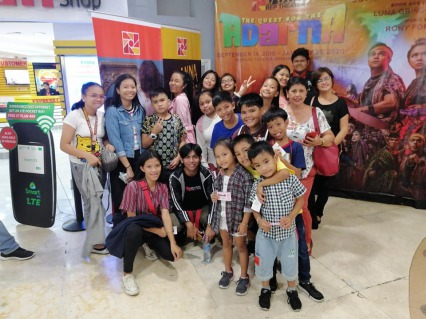 The UN Exhibit on the Sustainable Developmental Goals (SDGs) was held 15 to 29 December 2017. During the launch, special quest, Teresa Debuque, UN National Information Officer UNIC, Manila gave a presentation on the SDGs and how the local community could help in achieving these goals. There was Q&A after the presentation. Invitation and pictures are enclosed. There were a total og 197 visitors during the entire period of the exhibit.

Sariaya Learning Centre (SLCD) has been approved for association with the United Nations Department of Public Information.

The committee on Non-Governmental Organizations of the Department of Public Information (DPI) met on 23 June 2017 and approved the application of SLCD to be associated effective immediately. The association constitutes a commitment of SLCD to disseminate information and raise public awareness about the purposes and activities of the United Nations and issues of global concern. Click here to read more about it: Committee Approves 15 Non-Governmental Organizations for Association with United Nations Department of Public Information

The Agawan Festival is an annual agricultural festival held in Sariaya, Quezon, Philippines every 15th of May, Feast of San Isidro Labrador, the patron saint of farmers.
Houses were decorated with colourful pahiyas including the Centre. Because the San Isidro procession passed by the Centre, it was also decorated with colourful pahiyas – a nipa hut full of goodies, a horse-driven karitela with a man and woman dressed for the festival, a carabao, San Isidro bread, mangoes, bananas, young coconuts, etc. The crowd accompanying the procession had their pick of all the edible decorations. 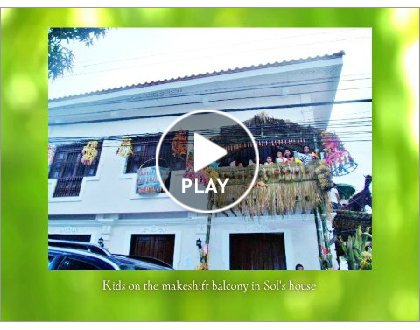 More pictures of the Agawan Festival: 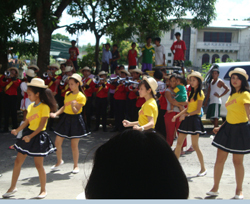 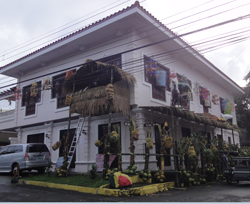 A group of young girls going to each house dancing
to a modern tune.
SLCD all decorated with pahiyas for the Feast
of San Isidro. 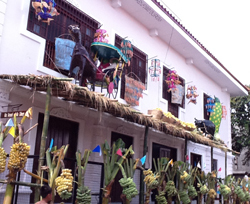 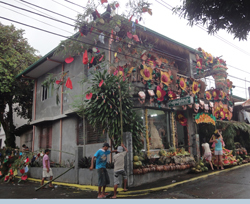 A karitela with a couple ready to go to the procession. The bunches of bananas, coconuts and mangoes were given to those attending
the procession.
Another house in the corner decorated as well. The procession of San Isidro passed through here also. 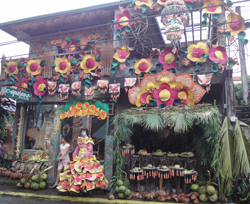 A closer view of the very colourful house.
This was the house that won the contest for most colourful and creative - the making of Leah's special tamales. 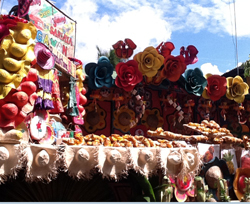 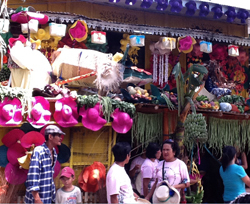 Colourful hats decorated this house
Local tourist came to see the colourful decorations called "pahiyas".
String beans decorate this garage.
The Agawan Festival is an agricultural feast celebrated on the 15th of May, the feastday of San Isidro Labrador, the patron saint of farmers. 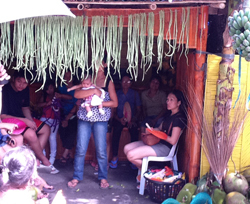 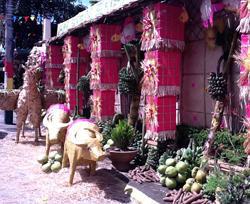 and the Rotary Club of Sariaya presented
"The Emergent", an art exhibit of Sariaya's homegrown visual artists featuring Girlie Alcala and Marissa Tan.
The exhibit was scheduled during the week of the Agawan Festival, 15 May 2012, to seize the opportunity of many local and foreign tourists visiting the town. Invited guests for the ribbon-cutting were Rowena Masilang, wife of the Mayor of Sariaya; Toti Valle, President of the Rotary Club of Sariaya (RCS); Paeng Tantuco, Former Rotary International District Governor (1999-2000), District 3820.
There were over 160 visitors at the exhibit. Some comments from attendees:
“It is so wonderful to know that there is a venue for our Filipino artists to showcase their talent”
“I love the watercolors, colored ballpen (!!!) poster paintings, especially SOLITUDE, Bantigue and portraits of women. Great work! Mabuhay ang Pilipina”. 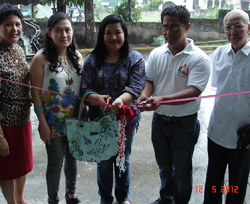 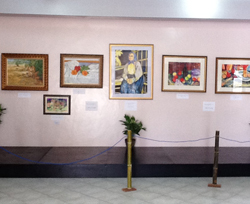 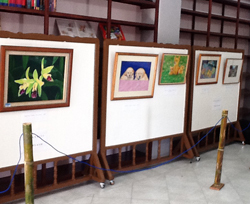 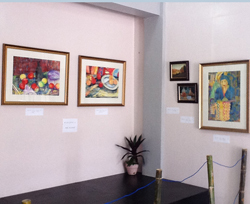 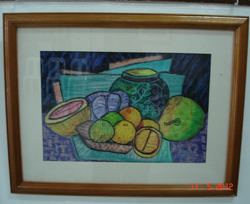 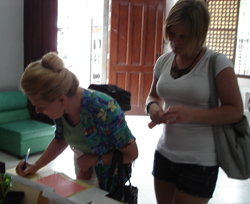 A Bountiful Harvest, coloured ballpen by Marissa Tan.
A mother and daughter from Texas giving their comments on the art exhibit. 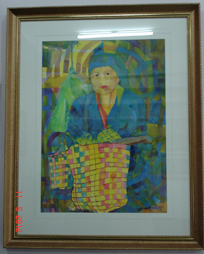 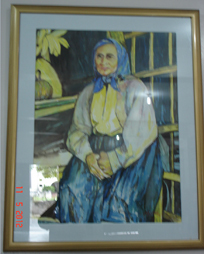 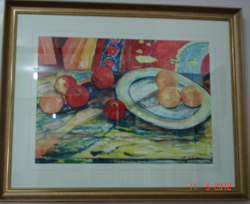 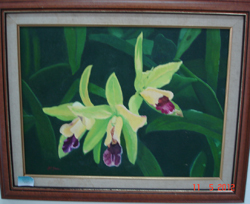 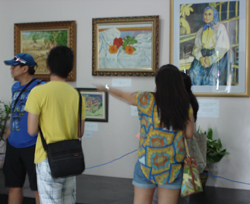 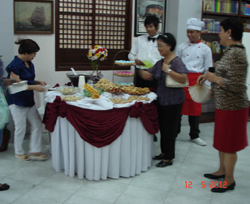 Visitors during the art exhibit
Opening of the art exhibit.
Janet Salazar's Blog
http://janetcsalazar.com/
Of New Life and Passion
October 1, 2010 marked the beginning of a new life for a dear friend, Isolda “sol” Oca. After 29 years of dedicating her life working at the United Nations Headquarters in New York — she finally welcomed the big letter R! Yes, R is for retirement.
Knowing Sol, she definitely did not waste any time! Twenty days after her retirement, she held a wonderful dinner reception for the launching of her new NGO, her “baby” — the Sariaya Learning Centre for Development (SLCD). SLCD is based in Sariaya, Quezon, Philippines, and was formally established by Sol in 2007. Sol’s inspiration to put up her own NGO came from Carol Lubin and Virginia Hazzard, both stalwarts in the NGO community at the United Nations.
Sariaya Learning Centre for Development envisions to help alleviate extreme poverty in the Philippines through education for out-of-school youth. SLCD also hopes to provide a facility for women’s economic and social empowerment, establish a highly professional community theater organization, and provide a community library for Sariaya.
The October 20 launching of SLCD which also served as Sol’s retirement party for her colleagues at the UN and the NGO community was truly a night to remember!
Sol Oca performs with the UN Singers!
Traditional Filipino food was served — and everybody savored what the Philippine cuisine is most famous for — “lechon”! (a whole roasted pig cooked over charcoal). I wasn’t surprised to turn and see that lechon was almost gone by the time it was my turn to partake of such mouth-watering dish. I was just thankful that they still left me with some of my favorite part — the crispy skin! (did I hear somebody whisper, cholesterol? I can’t hear you…) I remember growing up in the Philippines and as a child having to wrestle with dozen other cousins for that crispy lechon skin, yum.
And how could I forget — the United Nations Singers! They graced the night with their spectacular voices , Sol being one of them. Everybody was delighted and entertained. Constance made sure that our two special guests, Vicky Baul and Nancy Silva enjoyed the party. The night was even made special and memorable with dear friends I had the chance to enjoy the night with — the energetic and always beautiful Judy Lerner, Chuck Hitchcock of Peace Action, the famous Dr. Judy Kuriansky http://www.drjudy.com, Joan Levy of ECPAT, Estelle Perry and Ademola Olugbefola of the Executive Committee, and Dr. Sherill Kazan. Maria Luisa Chaves, Chief of NGO Relations of UN DPI, also made sure she was there for her former colleague.
I salute you, Sol, for your vision of helping others have a better chance at life. I wish you all the best in this new phase of your life which I’m sure you are embracing with eagerness and enthusiasm, with high hopes and fresh perspectives. May the fire of your passion for a better life for others continue to burn in your heart. Mabuhay ka, Sol!
Say cheese! L-R Jeffery Huffines, Ademola Olugbefola, Sherill Kazan, Paul Hoeffel, Sol Oca, Janet Salazar and Constance Peak
NGO Reporter
A Salute to Sol Oca: 29 YEARS OF UN SERVICE
Levi Bautista, CoNGO Executive Director, accepting Sol Oca as a new member: moving from UN to NGO in 29 Years!
THE NGO REPORTER SALUTES SOL OCA FOR HER 29 YEARS OF UN SERVICE AND CONGRATULATES HER FOR FOUNDING THE SARIAYA LEARNING CENTRE FOR DEVELOPMENT (SLCD) 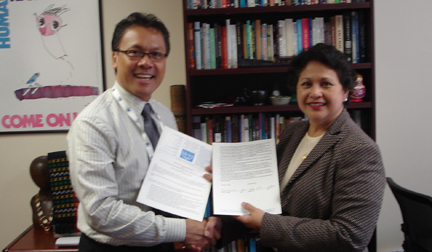 New York, October 2010: Over 100 guests, including a large contingent of NGO representatives, attended the launch of the Sariaya Learning Centre for Development (SLCD) at the Church Center for the United Nations. SLCD is an initiative of Isolda Oca, who retired after twenty-nine years at the UN. Her last assignment was in the Department of Public Information (DPI)/NGO Relations office.
Ms. Oca was inspired to start an NGO by Carol Lubin and Virginia Hazzard, two stalwarts in the NGO community who have now passed on. SLCD's primary objective is the alleviation of extreme poverty through education for the residents of Sariaya, Quezon and surrounding towns, in the context of achieving some of the United Nations Millennium Development Goals (MDGs).
The facility that will house SLCD was formed from the ruins of an ancestral home and is planned to use solar power and collect rainwater. It will be the first green facility in the area.
Following her PowerPoint introduction of SLCD, Ms. Oca invited the audience to visit the Philippines and participate in the work of the Sariaya Learning Centre for Development.
To view the complete NGO/DPI Reporter click here.