The first programme to be realized is the creation of a library wherein books and computers will be setup. The five desktops, five flat screen monitors and two laser printers were donated by the United Nations. This happened in 2012.

The second programme is the education for out-of-school rural youth. A van, school materials is still  needed. The cost of a van is US$19,000 and the cost of hiring a full time teacher is $500 a year.

Thru the kindness of Mindy Perez-Rubio, President and CEO of REP, Sariaya Leanring Centre for Development (SLCD), Teatro Sariaya, was able to bring kids and adults to watch REP's production of "The Quest for Adarna" in Greenbelt 1 on Sat, 25 Jan 2020. All enjoyed the show very much. What a learning experience for them!

The Summer Class Programme was held last April 22,2019 to May 23, 2019, which aim to improve the reading, writing and math skills of children. The  programme was targeted at pupils who had been predicted to achieved below in English and Math by end of thier class.

The programme involved morning session focused on writing and reading and enrichment activities provided in a 4 weeks summer activities.

But the main target of this is to boost child confidence in solving Mathematical problems and have fun with numbers. We also made some arts like making a robot using old boxes and other reusable art materials.

The Schedule of Audition and Rehearsal has been worked out starting 14 August to 28 November 2018.

There were 17 students in the Summer class Tutorial Programme from ages 4 to 10. Three were sponsored and 14 paid their dues. Melody Jamilano was the teacher who handles the classes.

There were 14 students who participated in the summer tutorial that was held from 11 April to 13 May 2017.

For the first time thare were music classes being given for piano and guitar. A piano was donated by friends, Marte and Rolly Perez to SLCD in February 2017 for the use of the community.

The UN Exhibit on the Sustainable Developmental Goals (SDGs) was held 15 to 29 December 2017. During the launch, special quest, Teresa Debuque, UN National Information Officer UNIC, Manila gave a presentation on the SDGs and how the local community could help in achieving these goals. There was Q&A after the presentation. Invitation and pictures are enclosed. There were a total og 197 visitors during the entire period of the exhibit.

A piano recitalwad held on 28 December 2017 from the students of St. Joseph Academy. There were 100 visitors and including participants.

"Ang Munting Prinsipe: The Musical" was presented by SLCD's Teatro Sariaya on 30 November until 4 December 2016 at the SLCD facility in Sariaya and a performance in SM Lucena 's Activity Center on 6 December 2016. Translated into Pilipino by Lilia F. Antonio, original lyrics of 15 songs written by Antonio, Victor Lantin Reyes and adapted into Sariaya Tagalog by Eriberto Ricardo J. Dedace. "Le Petit Prince" The original version by Antoine de Saint-Exepery.

For the first time the theatre space had been sound proofed and air-conditioned and professional lighting was used.

There were 13 students who graduated this summer class. On 13 May was the Recognition Day. The series of the topics used was based on the K-12 Curriculum of the Department of Education. The SLCD Summer Class focused on the three major subjects- reading, writing and math. Its aim was to help the students learn and think mathematically, speak in English and see the world of science to help them maneuver in a modern society. All examples and problems were in the worksheets and carefully chosen from the teaching experience of the teacher.

Summer Class of 2016 made the learning of the students worthwhile. The students and the teacher who made full use of the series of the K-12 Curriculum enjoyed the experience with the teacher and learning the new curriculum as well.

There were a total of 29 students who completed the Summer Class Programme ages 3-11 years old from 13 April to 14 May 2015. The focus was reading, writing and math but it also included some classes on the arts. Melody Jamilano and Magelyn Uba were the two teachers who handled the classes. On 14 May, Recognition Day, was led by Ms. Sol Oca, who gave good advice to the children as well as the parents. The children showed their respective talents.

Follow up practice is a no non-sense drill of problem solving in English grammar for oral classes. Although some were assigned as written work for slow learners, brain exercises were constructed so that slow learners may be able to solve them using manual computation and the talented ones using analysis.
Distributed Calendars to the Schools of Sariaya, Quezon from SIKHAY (Sigla, Kalusugan at Buhay)

There were 19 students ages 6 – 11 years old who completed the Summer Class Programme from 7 April to 12 May 2014. They learned English by listening, speaking, reading and writing. They were given carefully selected and designed materials the teachers guided them.. While working on the activities and exercises, their communication skills were greatly improved. They were able to express their thoughts, ideas and feelings effectively and clearly. They developed their self-confidence. As they dealt with and interacted among themselves. They were able to practice their communication skills learned in the different lessons. These skills helped them to become responsible and productive persons. For the first time SLCD focused on the arts which were incorporated in all their activities.
In Mathematics, resource materials were prepared. These provided integration of values and life skills using different teaching strategies for an interactive learning process. With multiple intelligence techniques games, puzzles, song were integrated in each lesson which made learning Mathematics fun and enjoyable.
On 12 May 2014 was the Recognition Day. The ceremony was started by a welcome address of Ms. Isolda S. Oca. The Founder and Executive Director of SLCD. Each pupil had their own part in the programme. They showed their talent in invention through recycling materials. Before the programme ended, Certificates were distributed by Ms. Sol. She also ended the programme by giving an inspirational speech.

United Nation Information Centre (UNIC) (15 May 2014)
SLCD became a facility to house UN Publication. (Please see Photo Gallery)
Computer Training of Basic Microsoft Word 2010 and Microsoft PowerPoint 2010 ( 22 - 23 November 2014)
On 22 and 23 of November 2014 a two day training of Basic Microsoft Word 2010 and Basic Microsoft PowerPoint 2010 given by Ms. Alice Sabalones Tanoue . There were total of 18 people ages 7 – 34 years. Handout, Tips and Quick Reference were given. There were 8 people in the first batch 6 in the second batch and 4 people in the last batch.
Folk Dance
There were 20 Senior Citizens who took folk dancing classes run by Ms. Benilda Quejano.They used the Multi-Purpose Center whenever they practiced for their presentation and competition.
Christmas Party (7 December 2014)
7 December 2014 SLCD celebrated the Christmas Party. There were 35 people attended with. Lots of games, prizes and food. All of them participated in the games.

Summer Tutorial Programmes (8 April to 11 May 2013)
New York Phase Tutorial Programmes (21 May to 17 July 2013)
Theatre Workshop by Christine Pinnell (16 & 17 May 2013)
Attended by 30 students.
Womens Project (31 August to 1 September 2013)
TESDA together with SLCD and the Franciscan nuns of Sr. Jospeh Academy, headed by Sr. Nimfa, embarked on a twine project for the Sarap Buhay Community in Baranggay Tumbaga where a group of women worked on coconut husks as raw material. to produce twine. Coco Nucifera Pacific brought the raw material and colllected the finished product from their area and paid the women. Please see thePhoto Galleryase.

Translated into Pilipino, "Isang Pamaskong Awit" by Tereso S. Tullao Jr. and adapted into Sariaya Tagalog by Eriberto Ricardo J. Dedace. Auditions were from 18 to 21 September and rehearsals started on 24 September. The cast include members of the community. Please visit Sol Oca's Facebook account for more details on this project. Also visit our photo gallery.

Piano, guitar, poetry and song as well as reading of an excerpt from Nick Joaquin’s play “Portrait of the Artist as Filipino." An excerpt from "Simoy sa Kaparangan" a zarzuela by Bernardo Solis Metra was read for the first time.
Performers included Rading Malabanan, Nancy Valdoria, Ed Decal, Lydia Pablo,Marylex Montelibano and Sol Oca.
Tina Decal, General Manager, Fantasia Travel and Tours, brought some 30 local tourists to the Centre as part of her Ultimate San Isidro Festival. Tina remarked on her webpage, Kulinarya Tagala “I was operating 3 tours yesterday and tour guiding at the same time! Again the Bayanihan Spirit of Quezonians was all time present! Thank you... Patis Tito Garden Cafe, Sol Oca (awesome piano performance and Tertulia presentation in her residence...” 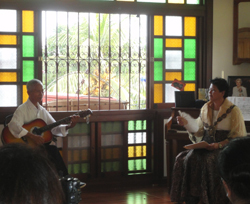 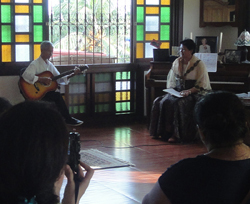 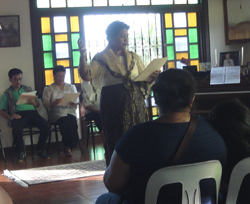 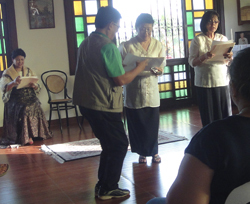 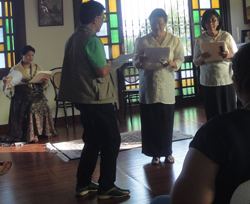 Bitoy reminisces about the tertulias performed in the different houses in Intramuros during happier days.

A month long free tutorial programme for kids from the community ages 4 to 12 on reading, writing and math. The morning sessions were from Monday-Friday, 9 am to 11 am. The programme started with 30 kids with 13 children finishing and receiving their certificates. 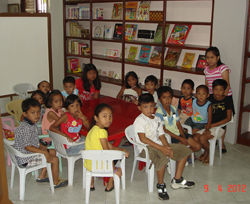 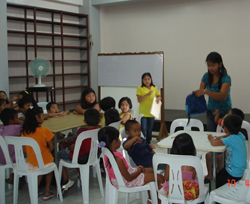 The programme started with 30 kids from the neighbouring areas.
Teacher Tina and Librarian Sheryl were getting the kids organized. 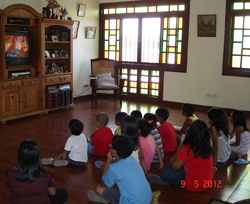 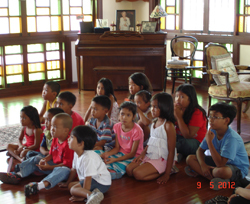 Disney film "Anastasia" was shown to them on the second to the last day.
Kids engrossed watching the animation movie. 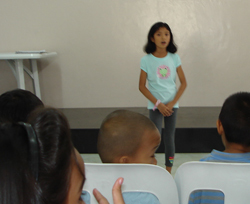 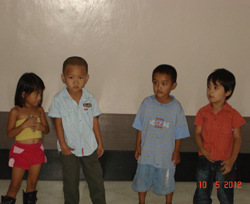 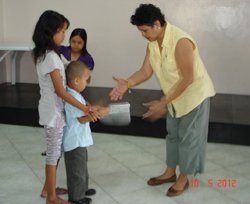 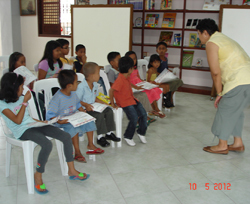 Presentation of attendance certificates on
the last day.
Sol Oca asked them what they wanted to be when they grow up. 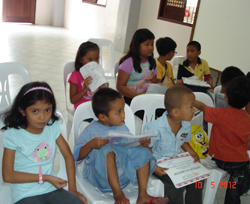 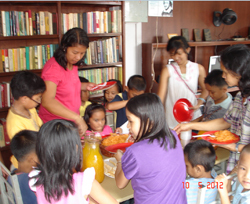 Holding their certificates of attendance
Spaghetti and sandwiches for the last day. 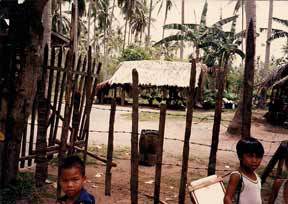 Education for out of school rural youth– Presently a survey is being compiled on a specific area in Sariaya of where SLCD will work in. Before a Centre can be built, a van with educational materials will go to the area regularly and gather the youth to teach them basic skills of reading, writing and arithmetic. Future plans will include other vocational skills such as computer repair, plumbing, carpentry, cooking, housekeeping, etc.

Teatro Sariaya - a community theatre to educate members on acting, directing, production, lighting, music, dance, singing, as well as marketing and other aspects of theatre. In the future film will also be incorporated. Plays, recitals and other productions will be the end-result.

Library with computers and Information Technology - Now open, this programme is the first programme implemented. The books and computers are from New York City, U.S.A.